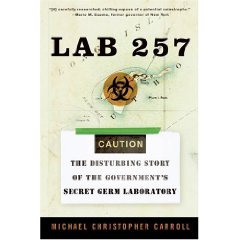 If you haven’t read this yet, I highly recommend it! Buy at Amazon.

There is no coincidence that “Montauk Knee”, Dr. Joseph Burrascano and Dr. Alan MacDonald all appeared around the same time less than two miles from Plum Island, the home of Lab 257, a federal germ research facility.

“Lab 257“, written by Michael C. Carroll, was published at a time when hundreds of thousands of people were ( and still are) searching for answers about Lyme disease, (which may soon become one of the largest epidemics of all recorded time.)  The book reads better than your favorite spy thriller, but finishes like a horror novel instead of a documentary.

Even the most severe critic cannot find flaws in the hard evidence, meticulous interviews, and obvious conclusions that Mr. Carroll has made and collected over a seven year period. He even visited the government facility himself on six occasions and witnessed firsthand the deplorable physical condition of the buildings that make up the Lab 257, the lab which contained hundreds of deadliest germs on the planet.

For those who have read “Lab 257“, written by Michael C. Carroll, it must be agreed that the book is thoroughly researched and exceedingly well documented. However, when most people bring it up, there is a hint at “conspiracy theory”, and perhaps even a few eyes rolled.

You would understand that reaction if it were only based upon a rumor linking Nazi bio-warfare with Plum Island. However, the information regarding tick experimentation came from actual documents delivered under the Freedom For Information Act by the USDF from the Vault of the National Archives.

The little-known facts had to do with the involvement of the well-known anti-Semitic  Dr. Erich Traub at the installation , opening and management  of Lab 257, and his personal direction of at least 40 experiments on Plum Island.

Dr. Traub left the US immediately preceding World War II to join the Nazi party where he reported directly to Heinrich Himmler in the “Cancer Research Program” which was the cover name of the Nazis biological warfare program.  This may not be alarming by itself but considering the book, “The Belarus Secret”, by Attorney John Loftus (interviewed on 60 Minutes):

“In the preface of The Belarus Secret, Loftus laid out a striking piece of information gleaned from his spy network: ‘Even more disturbing are the records of the Nazi germ warfare scientists who came to America. They experimented with poison ticks dropped from planes to spread rare diseases. I have received some information suggesting that the U.S. tested some of these poison ticks on the Plum Island artillery range off the coast of Connecticut during the early 1950’s. . . Most of the germ warfare records have been shredded, but there is a top secret U.S. document confirming that ‘clandestine attacks on crops and animals’ took place at this time.”

“Preposterous as it sounds, clandestine outdoor germ warfare trials were almost routine during this period. In 1952, the Joint Chiefs of Staff called for a ‘vigorous, well-planned, large-scale [biological warfare] test to the secretary of defense later that year stated, ‘Steps should be taken to make certain of adequate facilities are available, including those at Fort Detrick, Dugway Proving Ground, Fort Terry (Plum Island) and an island field testing area.‘ Was Plum Island the island field testing area? Indeed, when the Army first scouted Plum Island for its Cold War designs, they charted wind speeds and direction and found that, much to their liking, the prevailing winds blew out to sea.”

You still might roll your eyes thinking that every conspiracy has some of their theory based on facts, and indeed, the tick tests were happening in the ‘50s and yet Lyme disease did not show up until the 70’s.

According to Mr. Carroll, when the Lab opened it hired sharp shooters to kill deer and any other mammals swimming onto or trying to swim off the island in order to contain any possible germs to the island.  However over the next two decades the budget for the Lab went down and safety precautions completely vanished.  In fact the buildings that were once airtight had disintegrated with time and lack of attention to the point that birds actually nested in the rafters of some of the buildings.

The program concludes with examination of Plum Island’s work with the “Lone Star Tick”-native to Texas. The focal point of experimentation on Plum Island in the 1970’s, the Lone Star tick-like Lyme Disease–is now spread throughout New York, New Jersey and Connecticut. How did that happen? ” . . . The lab chief [Dr. Charles Mebus] failed to mention that Plum Island also worked on ‘hard ticks,’ a crucial distinction. A long overlooked document, obtained from the files of an investigation by the office of former Long Island Congressman Thomas Downey, sheds new light on the second, more damning connection to Lyme disease. A USDA 1978 internal research document titled ‘African Swine Fever’ notes that in 1975 and 1976, contemporaneous with the strange outbreak in Old Lyme, Connecticut, ‘the adult and nymph stages of Abylomma americanum and Abylomma cajunense were found to be incapable of harboring and transmitting African swine fever virus.’ In laymen’s terms, Plum Island was experimenting with the Lone Star tick and the Cayenne tick-feeding them on viruses and testing them on pigs-during the ground zero year of Lyme disease. They did not transmit African swine fever to pigs, said the document, but they might have transmitted Bb to researchers or to the island’s vectors. The Lone Star tick, named after the white star on the back of the female, is a hard tick; along with its cousin, the deer tick, it is a culprit in the spread of Lyme disease. Interestingly, at that time, the Lone Star tick’s habitat was confined to Texas. Today, however, it is endemic throughout New York, Connecticut, and New Jersey. And no one can really explain how it migrated all the way from Texas”.

And yet, the growing controversy about the book is not surprising given the astonishing mismanagement of deadly viruses by our government – a government which I am normally the first in line to support. Nobody wants to believe the horrifying facts revealed in this book, but it make sense when you look at the dates that Lyme disease began to spiral out of control, and the epicenters from which they spread.  A further shattering conclusion that was barely hinted at, is the curious rise of co-infections being diagnosed – all carried by the intensely frightening and seemingly indestructible tick.

Now, the island is owned by Homeland Security and is strictly off limits to the public.